Aaron Dubrovsky was born in Yurevichi, Belarus.  He is the grandson of Itzhok Yankiv Schwartz.  His mother is one of the Schwartz sisters.  On the 1922 passenger list at Ellis Island, Aaron listed his father Chamon Lew Dubrovsky, living at Yurevichi Russia, as his nearest relative.

Aron is remembered as being tall and handsome.  He was in the Czar’s army.  He married Leah Edelman (possibly Edlin) who was born in Chornobyl, Ukraine.

The Dubrovsky family emigrated to Jaffa Palestine sometime before March 1921.  Their emigration may have been related to the Russian Revolution (1917 – October 1922).  Harry, being part of the Czar’s army, probably fought in the White Army and needed to leave the country.

Lea and Aaron’s daughter Shoshana was born in Jaffa Palestine on 10 March 1921.  Palestine was under the British Mandate during this time.  Between 1920 and 1921, Jaffa experienced many Arab attacks against Jews.  These riots probably led to the family’s emigration in 1922.

The Dubrows arrived in Ellis Island in June 1922.  Their host was Lea’s brother, Morris Edlin, a grocer living in Philadelphia Pennsylvania.  Morris would be a witness on Aaron’s naturalization application in 1929, at which time Aaron changed his name to Harry Dubrow.

The Dubrow family operated a grocery store in Philadelphia, then a small poultry and egg farm in Toms River, New Jersey, near Maple and Vermont Avenue.  This was near the family farm of Sarah and Nathan Suchman.  The Dubrows later moved to California.

The “Dubronwsky” family arrived in New York from Naples Italy on the ship Providence. 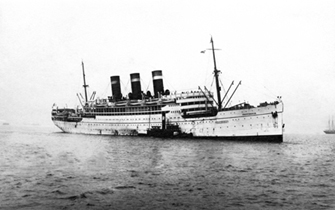