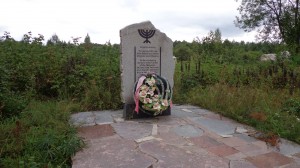 Yurovich Holocaust Memorial
To the everlasting memory of the Victims of the Holocaust. 46 Jews from Yurovichi were brutally murdered here in August 1941.

Yurovich Cathedral c. 2006
Built from 1726-1758 by Jesuits. Transferred to Bernardine monks in 1820. Closed in 1831 after an 1830 rebellion. Closed again under “Russification” orders from Moscow in 1864. Transferred to Orthodox Russian church and renamed “Church of the Nativity of the Blessed Virgin” in 8 September 1865. An additional 12 dome baroque building was constructed from 1873 – 1876. Partially disassembled in 1958. 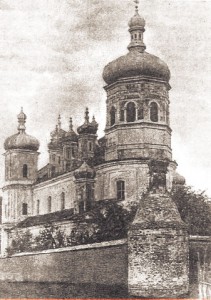 Yurovich Cathedral after 1873
The Yurovich cathedral as it would look to Abraham Kolik. From 1873 to 1876, the twelve-dome baroque building was constructed. See also: http://ais.by/story/1026

May 02nd, 2013 Posted by Jon Jaroker Filed in: Photographs, Yurevich