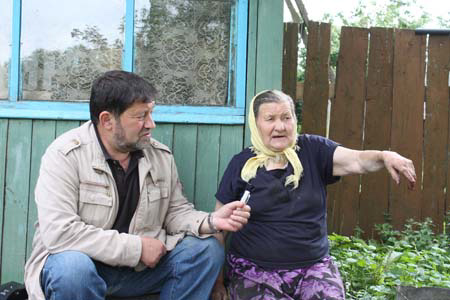 An eyewitness account of Yurevich in August 1941 was recorded by Arkady Shulman with Valentina Hotkina. This interview states that the Holocaust Memorial in Yurevich fails to mention Jews from Polotsk, is in the wrong location and lists the wrong number of victims. The interview describes the murder of Michael Levine (Михель Левин) and family.

I was born in 1927, not far from the Nezar farm in Yurovichi. Before the war Yurovichi was a large village, not like today. There was a large church and square, where our house stands today. The Germans burned Yurovichi during the war. Only one house remained. …
I well remember what it was like before the war and at wartime. Across the street from our present house lived a Jew, a shopkeeper named Michael Levine. He had a family: a wife and a child, a little girl, so cute. I often went to Michael’s store. He sold candy. I would beg my mom for half a dozen eggs and go to him. He would give candy for that handful of eggs. … — Валентиной Ильиничной Хоткиной, 2009

May 02nd, 2013 Posted by Jon Jaroker Filed in: Observers, Yurevich