Feige Kolik’s 1914 ship manifest shows “Uncle Yossel Atlas” as her host in America.  Who were the Atlas family? (See Update to this Story) 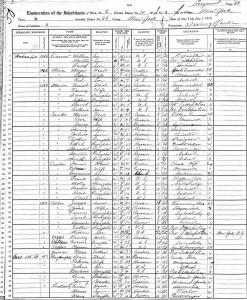 The 1915 New York State Census show the Atlas family residing at 1562 Madison Avenue in New York City.  This is the same address that Feige Kolik gave for “Yossel Atlas“, her American host, to the Ellis Island immigration official.  On Feige Kolik’s passenger manifest, the last digit in the 1562 street number was obscured and “Madison” was hard to decipher.  This address became known only when I searched census records for “Feige Atlas” and made the connection.  At first, I thought that Feige Kolik was mistakenly identified as a daughter of Yossel Atlas, but then I found the Atlas family in Ellis Island passenger manifests.

Arriving in New York on 10 February 1907, Bessie Atlas (listed as “Bassie”) traveled with her daughters Feige 9, Sure 4, Chane 10 months, and son Elie 6.  The passenger record shows Elie as “In Hospital” with an adjacent stamp, “Died in Hospital”.  The place of birth for Bessie and her children is Kalenkewitz.  This is modern-day Kalinkavichy in Belarus. (Belarusian: Калінкавічы. Russian: Калинковичи. Yiddish: קאַלענקעוויטש / קאַלינקאָוויטש).

Bessie and her children were joining her husband “Josef Atlas” who is shown arriving alone on 14 May 1904 from Liverpool in the Ellis Island passenger manifest.  Josef Atlas listed his cousin M Selenko of 119 East 103rd Street, New York, as his host.

Hy Suchman remembers visiting “Uncle Atlas” when he was a boy, walking under a tunnel of the NY Central Railroad. He remembers Feige (later Fannie) Atlas marrying Fineberg, moving to Philadelphia and having three children. One of those children moved to New Rochelle, New York.

How is the Atlas family related to Feige Kolik?  I cannot find definitive records, but I can make a guess: Bessie and Hasia are sisters.  The common girl names Feige and Chana suggest that the mothers (Bessie and Hasia) named their daughters after the same women on the mother’s side of their family.  This decreases the probability that Bessie was sister to Abram Kolik, but is insufficient proof by itself.

Further research may provide the necessary evidence to prove or disprove this supposition.  Until then, I believe:

The 1915 Census show Esther and Nathan Atlas being born in New York.  Find their birth records to see Bessie’s maiden name.  Get naturalization records for Joseph, Bessie and their three foreign born children.

Yossel Atlas was a Milliner