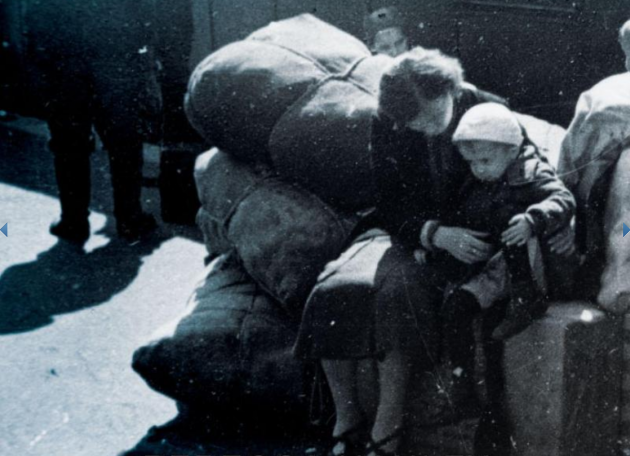 These books, first-person accounts and archival documents describe the experiences of civilians in the Soviet Union during World War II.  They give meaning to the challenges faced by Hana Kolik as she Evacuates her children from Kiev

The Lost Childhood website has moving stories of children’s experiences during World War II and their participation in the Soviet evacuation to central Asia.

To the Tashkent Station

The Soviet evacuation of factories and civilians to central Asia is described by Rebecca Manley in her book, To the Tashkent Station.  The book focuses on the evacuation of major cities, such as Moscow and Lenningrad, to Tashkent, Uzbekistan.  It references sources that describe the situation in other cities, such as the account by Vladimir Petrov in Alma-Ata and Zeed Levin in Frunze.  While this book does not cover the same path taken by Hana Kolik, it does capture the chaos, ineptitude and despair faced by women and children as they fled before the Nazi invasion and faced starvation and violence in central Asia.

My Retreat from Russia

This is an adventurer’s tale of a university student who is deported to a Soviet gulag, murders a gulag camp official with a pickaxe, participates in the Soviet evacuation to Alma-Ata while avoiding mobilization into the Soviet Army, reaches the United States with the aid of the Tolstoy Foundation and becomes an academic at Yale University. In his memoir My Retreat from Russia, Vladimir Nikolayevich Petrov describes life in Alma-Ata, Kazakhstan during the height of the Soviet evacuation.

The The Endless Steppe is a first-hand account of Soviet deportations of Poles to forced labor camps in Siberia, specifically Rubtsovsk. While focused primarily on the Rudomin family’s survival in Siberia, the memoir also describes the Soviet evacuation of factories, workers and civilians to Rubtsovsk. It contrasts the privileges granted these Russians to the starvation faced by the deportees.

Jewish Refugees in Tashkent has scanned registration cards of refuges.