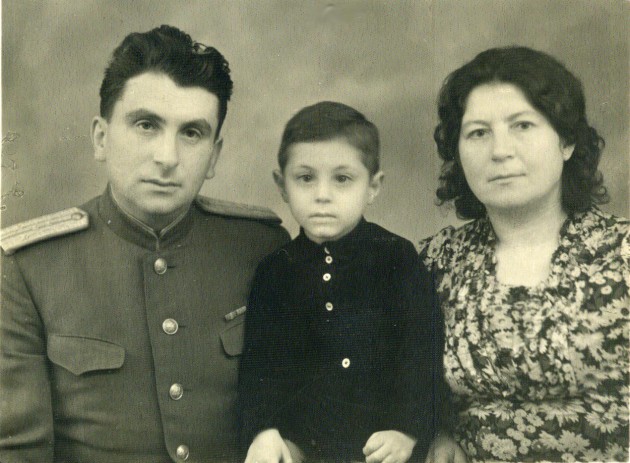 Nahum Yaroker, my father, was drafted into the Red Army a few days after Germany invaded the Soviet Union on Sunday June 22, 1941. Basia, my mother and a medical doctor, was summoned to the draft office the same day. She was dismissed as soon as the officials learned she was nine months pregnant.

I was born in the city of Kharkov, Ukraine, two weeks later and saw my father for the first time when I was five.

What happened after my birth I first learned from my uncle Yakov Lipovsky, who also lived in Kharkov at the time. The story of our evacuation from Kharkov to the Ural Mountains was well known in our family, and both uncle Yakov and my mother added some more details when I asked them later. 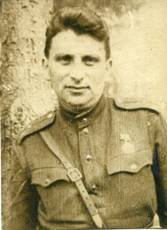 My father, Nahum, had served in the Red Army before and had a military rank of Lieutenant (the second officer rank in the Soviet Army). He was in the army through the entire war, was wounded, and finished the war in the rank of Major (the 5-th officer rank). My mother, Basia, was a medical doctor, and as such, she also had a military rank as an Army reservist – it was a mandatory part of her training in the medical school.

The day I was born, German air forces were already bombing the city on a regular basis. After my birth my mother and I stayed in the maternity hospital for several days. Mother told me that during the air raids the newborn babies and their mothers were rushed to the shed next to the hospital. The infants were often separated from their mothers. Sometimes the labels on babies’ hands were missing, and mothers had hard time recognizing their newborns. There was a good chance that some children were switched.

After we left the hospital, the city was already heavily bombed, and the evacuation was well under way. My mother was assigned a high priority for evacuation. It was not because she was Jewish, but for the reason that she was the wife of a serving military officer and had a newborn baby. The highest priority for evacuation was assigned to Communist and Government bureaucrats with their families, followed by military institutions, military personnel and their families. It is hard to believe, but very few Soviet citizens knew in 1941 about Nazi’s atrocities toward Jews. After Stalin and Hitler signed a treaty in 1939, the government controlled Soviet media did not say anything negative about Nazis. Most of Jews did not know that they were doomed to be murdered if they did not leave the occupied territory. 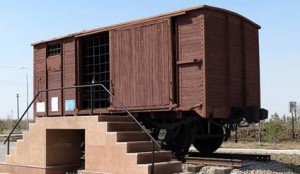 We were directed to the train that was to leave to the East. Uncle Yakov helped us to pack the most necessary belongings, and my mother and I (a few days old) went to the railroad station. We and several other families were packed into so called “teplushka” — a cattle car.

It was the middle of a hot summer, and the car had only two small windows on the top. There was no running water, no place to swaddle a baby, there was barely enough space for all people to sit on top of their suitcases. Because of damaged railroads and general disarray of the first days of the war, the train was moving very slowly, with frequent stops. After more than a full day of this ride, we were still in the vicinity of Kharkov, less than 20 miles from our home.

When mother finally had a chance to take me out at the rail station, she realized that I could not survive such a ride much longer. The major problem was that she could not swaddle me. She told me, that as a doctor she recognized signs of severe poisoning. On the top of this, she started to lose milk, probably because of lack of drinking water.

I do not know what other woman would do in such a situation, but my mother did not have second thoughts. She washed me at the rail station and simply walked back home. She only took her documents and whatever money she had, and walked.

I mapped the exact distance from the rail station of Merefa (where we got off the train) to our home in Kharkov: it was 26 kilometers (16 miles). There was no transportation there, especially into the city; everybody tried to leave the city. So my mother walked all 16 miles holding me in her hands. She left all her belonging in that car. It may look now as not a big loss – just some clothes, dishes, etc., but at that time it was a treasure. The country was poor, and the war made it much worse. I heard and read of many occasions when people were happy to give their jewelry, antiques, rare old books for some food, or for a pair of warm shoes, or a coat. But at that time my mother did not care about the clothes or other things left in the car, she only cared about her baby. (All family photos, letters and other papers were lost there too. A very few old photos I have were given to us by our relatives.)

It took my mother many hours to get back to the city. Fortunately, her older brother Yakov was still there. Two of her brothers lived in Kharkov before the war. When she returned to the city, the younger one was already in the army ( he was killed at the war the same year). Yakov was not drafted for medical reasons — he had a severe problem with his feet. My grandparents on both sides had many children, and most of my uncles fought in the war. Only uncle Yakov and my father’s brother Yefim could not serve in the army. (Three of my uncles were killed in the war.)

Uncle Yakov had a wife and two small boys. He worked at the military plant, that was about to be evacuated. Somehow, in the midst of the the turmoil he managed to add my mother and me to the evacuation list as a part of his family. In several days we were in the train again. The conditions should have been not as bad as during our first evacuation attempt, so we made it. It took us many days to get to the destination, to the industrial city Nizhniy Tagil in the Middle Ural Mountains. The military factory where uncle Yakov worked was moved there and soon it started manufacturing tanks for the army.

We stayed in Nizhiy Tagil for 4 years, until the end of the war. All 6 of us lived in one room – uncle Yakov, his wife Sonya, their two boys, my mother and I. Uncle Yakov worked at his military plant from the early morning to late night. Soon after our arrival my mother started to work at a local hospital, while aunt Sonya took care of all three kids. My mother was paid a very small salary (as everybody else), but she was eligible for the food stamps, which was much more important. There was a severe shortage of food, and the only sources of food were the stamps and the black market. Mother told me that she once tried to buy some food at the black market. She paid all the money she had for the stamps for bread, only to discover later that the stamps were fake.

But we survived that difficult time. Unlike those Jews who could not leave Kharkov and were massacred there.

A few people informed me that Germany is paying compensation to evacuation survivors and they recommend that I should apply. But I am very reluctant to do it. I even asked my rabbi, whom I highly respect, about the moral aspect of taking this money. He gave me a few good reasons for doing it, and advised me to take the money; if I don’t want to keep it I can give it to my children or donate to a charity. Of course, a couple of thousand dollars would be very handy, as we live on fixed income after our retirement. However, I don’t feel I can take their bloody money. If you have read this story you could understand my feelings.